Mise en place:  Preheat oven to 450 degrees.  Set the dough ball aside in a dark, warm place (not in oven) to rest and rise a bit.  Using a pastry brush, lightly cover two pizza pan bottoms with some olive oil; set aside.  Using a sharp chef’s knife, thinly slice red onion, mushrooms, tomatoes and olives (if using) and set aside.

The crust:  Prepare a flat, clean surface to roll out dough.  I put a couple of sheets of aluminum foil down on a butcher block table, but could have also used wax or parchment paper.  Sprinkle surface liberally with flour.  With clean hands, remove dough from bag and place on surface.  With a clean, dry bread knife (or a very sharp chef’s knife) carefully slice the ball of dough in half.  Put half the dough back into the bag while you work on the other half.  Use finger pads to push dough into a round, flat disc.  Flour a rolling pin and begin rolling out the crust, starting from the center and working your way outward in a circle, using additional flour if necessary to prevent sticking.  Roll until the thickness of the crust is about 1/8 inch, and the diameter is about 11-12 inches.  Sprinkle a bit of flour in the center and prepare the crust for transfer by folding the edges toward the center in four directions.  Be careful not to tear the dough while peeling it off the surface.  Place the folded crust in the center of the greased pizza pan and carefully unfold it, using the balls of fingers to reposition the crust so that it meets the edges of the pizza pan.  Repeat the whole process with the other dough half.  Once the oven is heated to 450 degrees, bake both crusts for about 5 minutes (do not let turn yellow or brown).  The edges may rise a little.  Remove from oven.

Toppings:  Using a pastry brush, brush the remaining olive oil onto the surface of the pizza crusts.  Sprinkle each crust with about 1/2 tsp dried oregano.  Divide the tomato sauce in half and, using the back of a tablespoon, spread 4 oz of sauce on each pizza crust.  Place sliced roma tomatoes onto the crust so that the edges touch.  Scatter on deli items (if using), then top with the vegan mozarella.  Layer on fresh ingredients – mushrooms, onions and basil.  Bake in oven for 10-12 minutes or until edges of crust are golden to light brown.  The more toppings it has, the longer it will need to bake.

Remove from oven and allow to cool for about 5 minutes.  Carefully slice each pizza into 8 slices with a pizza cutter.  Sprinkle with red pepper flakes (optional) before serving.  A salad on the side makes this a complete meal. 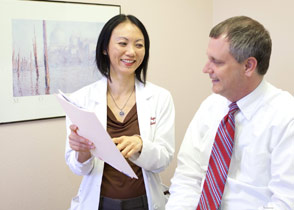 Meet Our Team
Partners in maintaining a healthy lifestyle 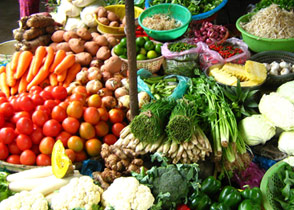